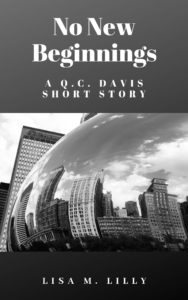 “None of them jumps out at me.” Joe glanced at his phone. Nearly eleven.

He’d spent hours researching online over the weekend, so he hadn’t thought finding the right ring would take more than forty-five minutes. An hour at most.

Now he worried he’d be empty-handed tonight. He had lunch plans with a new client at twelve-thirty and a conference call after that. He could fit in more shopping late in the day, but he needed to stop at the grocery store, too. To get steaks for dinner.

The man had a neatly trimmed salt-and-pepper beard and wore a powder blue sport coat. But he hadn’t introduced himself or asked Joe’s name, something Joe always did when he met a potential client. He was a good financial adviser, but no matter your track record people needed to get to know you before they handed over their money.

The salesman’s keys clinked on the glass as he unlocked the case. He took out the ring Joe had spent the longest time studying.

Its round single carat diamond shone under the banker’s lamp. Good clarity and color. Simple elegance in a white gold setting. Exactly what Joe had thought he wanted.

“You can return it if she’d rather choose her own,” the man said.

“That must be a big occupational hazard this time of year.” Joe set the ring down. “I read that a lot of couples break up right after Valentine's Day.”

The article had been in today’s Wall Street Journal, front page, the small column in the bottom center that was always human interest. Joe looked at everything else on his phone or tablet, but that one newspaper he liked to read in print.

“On Valentine’s Day too,” the salesman said. “Took my wife to Geja’s last year. You been there? Perfect romantic setting.”

The light in the iconic Lincoln Park restaurant came mainly from flickering candles, small sparkling lights over arched brick doorways, and flames under fondue pots. He had no doubt a lot of people got engaged there.

“This young guy actually gets down on one knee and holds out the ring. The girl stammers, stutters, says no. Turns out he flew in her entire family to surprise her. They were in the next room over and saw it all through the archway. Embarrassing for everyone.”

Joe’s eyebrows rose. He couldn’t believe the man had told a story showing a reason not to buy a ring. “I’m not worried about being publicly rejected. We’re cooking in.”

The salesman got one part of selling right. He laughed.

Joe strode north, the opposite of the direction he needed to go for his lunch date, to the 900 North Michigan shops. He’d pay more there because of the high rent location. But maybe he’d get a salesperson who could help. At forty-two he’d had serious relationships, but he’d never shopped for a diamond.

No one but Heather had made him want to.

He’d started thinking about it the first time he took her to the ballet. It had been like magic the way her eyes had lit up. And at a White Sox game last summer, the last in a bad season, she’d cheered for every player, no matter how he played. He’d never heard her yell at anyone.

Soon after the game, they’d first talked about getting married. In a roundabout way. He couldn’t remember how it started, but they’d both agreed that if they ever moved in together they’d want to be engaged first.

A month or so later, Joe found himself searching real estate listings. If they did move in together, he decided he’d sell his condo. He’d owned it for six years and loved it. But he didn’t want Heather trying to fit into his space. He’d been on the other side of that in his thirties, and it had led to endless arguments about closet space. Which had probably been a symptom of the other issues, but he still thought getting a place together was the best way to start.

Heather agreed. The question was where.

He preferred the quiet enclave in the Fulton River District where he lived now. She liked the West Loop, a neighborhood too noisy for him. And too filled with condos built in a rush in the mid-2000s with cheap materials. Chicago developers back then had been scrambling to cash in on the housing market bubble before it burst.

They’d almost settled on River North on the border of the Gold Coast. Close enough to bars and restaurants for Heather, but a few blocks nearer the quieter, tree-lined streets leading to the Newberry Library for Joe. Then, in December, Heather had surprised him with a trip to Aruba when she knew he’d planned to spend the holidays in Chicago with Quille. They’d worked it out. Compromised. And had a good time on the trip, too, because Heather always had a good time.

But she hadn’t said anything since Christmas about moving in together.

“C’est magnifique.” Carole, the owner of Café des Livres, set an espresso on the small marble table in front of him, her thin gold bracelets jangling. “Valentine’s gift?”

Joe turned the ring sideways. The ruby at the center, surrounded by small crystals, deepened to blood red in the sunlight streaming through the window. He’d bought it at Swarovski and been ten minutes late for his lunch.

“Ah, you propose and then you shop together,” Carole said.

Joe returned the ring to its box, shut it, and pushed it to the side of the bone white demitasse cup. “You think Heather will mind? That I don’t have the real ring?”

Carole slid into the seat opposite him. Her perfume’s sandalwood undertones mingled with the espresso’s dark roast, full-bodied aroma.

“No. If the man is right, the ring matters not. Also, every woman wants to choose her own ring regardless. And, finally, what woman does not love Swarovski?”

As Joe sipped the espresso his shoulders dropped and his jaw muscles relaxed. He’d had a long conference call in his office near the Board of Trade this afternoon, and through it he’d craved this taste. He’d passed two Starbucks and a Hero’s coffee bar on the way here.